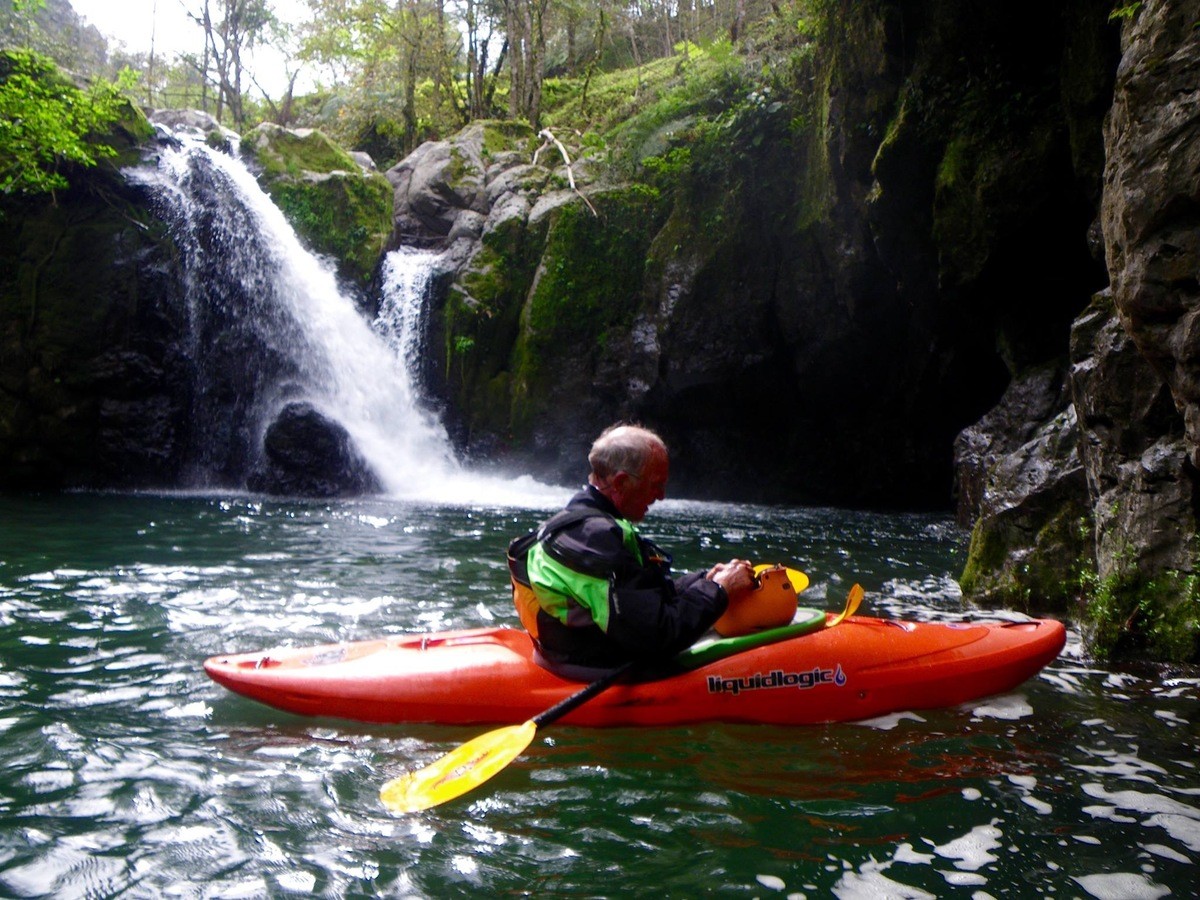 We had come back from kayaking in Bhutan in 1981, and now each of us had well-defined dreams for further river expeditions. But we couldn’t afford more overseas travel. It had to be within driving distance of Washington, DC. I was enthusiastic to explore the North Shore of the St. Lawrence in Quebec. For Andy Bridge Newfoundland was the top attraction, and for Wick Walker it was Mexico and Guatemala.

We went to Newfoundland first, and spent 10 days trying out rivers that were sometimes too low, and mostly very steep and rocky. We flew into the Cloud river in the Northern Peninsula, and took a couple of days to paddle out, and we found a connection across a canal-like waterway to the headwaters of the White Bear River, paddling it down to the coast, and catching a ferry as shuttle back to where we started.

Wick had read in a Spanish version of National Geographic about a first raft and canoe trip down a Mexican river, the Santa Maria that had been explored by a Mexican paddler, Jaime Megoya, spending 21 days. Wick proposed packing light, and attempting to repeat the same stretch in half as many days. So we drove down South in 1983 to run the Santa Maria and whatever other rivers that would satisfy our urge to paddle. We ran the entire whitewater section of the Santa Maria in five days, including carrying around Tamul Falls. This is a 300’ ft. high waterfalls which drops down into the box canyon of the Santa Maria, blocking the way past.

Jaime was so kind to join us later to show us some of the other local sections of rivers. It was semi-high water in October, so we were glad to have his guidance. We ran Pescados, Santa Maria, and lower sections of a sister river to the Santa Maria, the Moctezuma, So began our first white water experiences in Mexico.

Our first commercial trip in Mexico was offered in the fall of 1993 when we again paddled both the Santa Maria and the lower part of the Moctezuma. Micos Cascadas near to Ciudad Valles, in the state of San Luis Potosi, was our warm-up.   We each carried four days of food and gear in our boats. Wick called it Alpine Style – when you go as light as you can in a boat – travelling down boulder-choked rivers in the mountains. A dam was being completed on the Moctezuma blocking the flow of polluted water coming from a polluted tributary, and therefore the river was fed entirely by clear spring sources below the dam-works. It was in beautiful water and narrow, deep canyons that we followed 40 miles down the river to Pisa Flores!

After that, we found ourselves addicted to exploring Mexican rivers. There were many more rivers to probe. In Oaxaca there were several. Eric Brooks came on the trip and suggested an easy plan to expand our knowledge of local rivers. He and I left the group in Oaxaca City and headed out by public busses in two separate directions, to check out the suitability of certain rivers that we could see on the map. He found one called the Cajonos and I found another called Valle National. He succeeded in finding that the river had a little water, maybe 200 cfs, where we could put in. He also saw on the map a little trail that seemed to cross the river where he thought we could take out. Eric got back a day before me to announce the good news of his findings. We went for the Cajonos.

How can I describe that experience on the Cajonos? It was a full day’s travel to the put-in. I don’t know how any turns there were in the road before we arrived at the river, but they were myriad. My nephew, Matt, drove shuttle, while we spent until mid-afternoon scouting and running an intricate creek until we came to a magnificent, ancient bridge towering over the waters. Eric hiked up to the top of the bridge only to find that it was a foot bridge had no drivable roads leading to or from it.   A local person seen walking over the bridge told him that there were no other bridges below this one! That meant we had a three hour hike out to the nearest town or else spend the night in the open air. So we hiked with boats on our shoulders for three hours uphill to town. Eric Brooks forgot to bring shoes, so he had to tape his hip pads onto his feet to substitute for shoes. 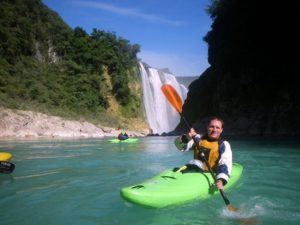 The town was remote and a gravel road passed through it. When, marching up out of the dark, with our boats on our shoulders and helmets, life jackets and skirts on, a couple of local women were startled to see us just as they left their houses. We must have been a fearful sight appearing suddenly from the direction of the Puente del Diablo, as the bridge was called. There was screaming to greet us, and we dropped our boats and took off our helmets off to try to placate the fearsome impression that we were making.

It was a Sunday night, the favorite night for the locals to drink heavily before the next day of early work. We passed a fully inebriated person along the gravel road of the town who seemed willing to show us to the nearest little “tienda” where we could get some refreshments. Only he was so drunk that he could not walk straight, and kept falling down. When we looked closer, we could see blood dripping down his face from having fallen already several times. We tried to help him along, and when we arrived at the little store, there were a dozen or so men standing around, and they were not quite so amicable. A couple of them who had been turned away from the US border sometime in their past, insistently demanded from us our identification papers since we were in their country! Then when they spotted the blood on our friendly drunkard’s face, they assumed that we had somehow mistreated him. The paddles we were carrying seemed very suspicious. Each of them were men, with machetes hanging from their waists. How were they to believe that we were only visiters wanting to paddle plastic boats down an impassable river?… Whaaat! No one paddles boats down that river full of rocks and cascades and then lives to talk about it! Very suspicious! 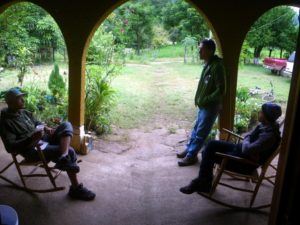 The store owner however, recognizing what was happening, pushed us quickly into his little store building and closed and barred the door. He then went out a back door to speak with the group of well juiced men and to allay the accumulating anger toward us. Here we were in a small town that we did not even know the name of, cloistered in a little store surrounded by angry locals threatening us by half way pulling out their machetes, having no idea how we were going to find our long lost driver.   The store owner however was especially caring for us, and as time went on he persuaded the angry men outside that we were not quite so evil as we looked, and that they had nothing to fear from us. Finally a little after midnight the interest of the group outside had waned, and we learned that there was another road bridge downstream where our driver probably was waiting. There was even a bus going that way at 3:00 AM in the morning that we could catch. So we joined briefly the beer festivities at the little store and then made it out to catch the bus. When we got to the bridge, Matt was contentedly asleep on the back seat of the van. The next morning we returned to town to collect our boats and gear, and everyone we saw was anxious to treat us to coffee and cookies and hear about where we had come from. They even invited us to dinner in the afternoon, and we were happy to comply.

There are many other un-run rivers in congenial locations, in Veracruz, Oaxaca, and Chiapas. Ciudad Valles and Tlapacoyan became our centers of operation. 2017 will mark 30 years of exploration and guiding in Mexico.   This year Calleva’s Liquid Adventure offers the following trips.