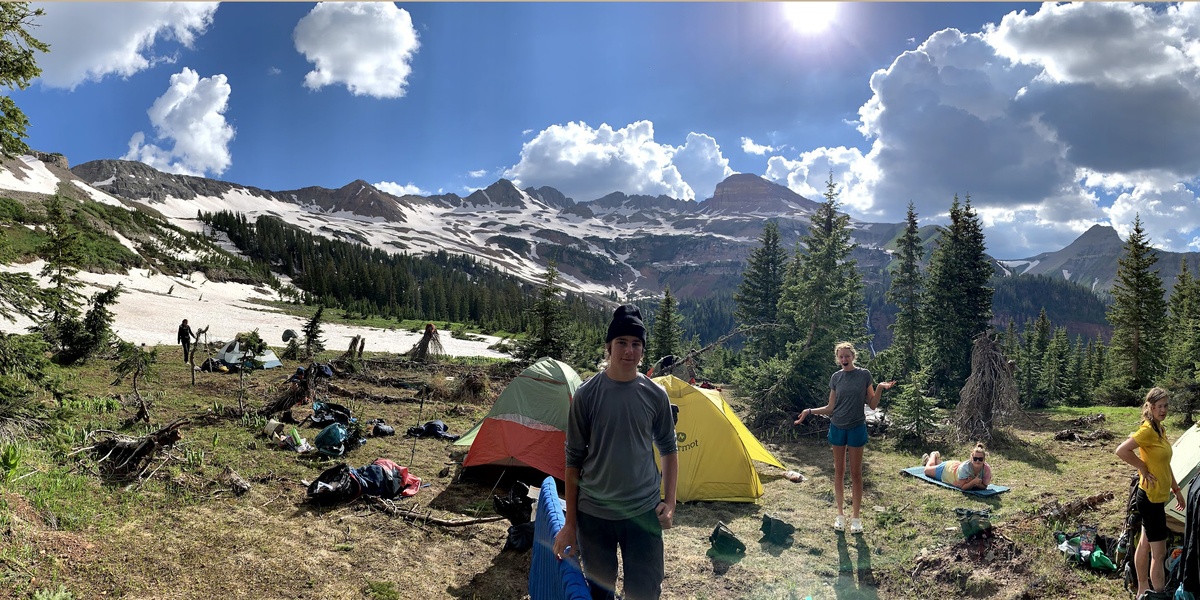 An Epic Adventure In Colorado

The Agents: 9 campers, 3 staff, and a dog named Goofy

The Mission: Drive from Maryland to Durango, Colorado, for the adventure of a lifetime.

We left with a rough plan of what we wanted to do and accomplish, but as we know, some adventure cannot be planned. We knew that we were going to whitewater raft, mountain bike, climb huge rock walls, dog sled, and do a point to point 5 day backpacking trip, but all the other things that went between those activities is where the real adventure was.

Driving across the country with friends is something that everyone should do once in their life, but doing it with a van filled with kids is something that should be done as often as possible. You get to see the towns, culture, and nature change before your eyes. When we stop for food and fuel, it’s easy to strike up a conversation with the people local to that stop. Each person returns to the van with stories about what they heard – it’s an organic way of dissecting the difference in where they grew up to where they are now.

DISCOVERY #1: Rural Arkansas is quite beautiful, and everyone goes out of their way to help.

After a day and a half of driving, we arrived at Red Mesa Ranch outside Durango. The kids woke up and their minds were immediately blown. Directly under their feet was fine desert dirt, but once we climbed on top of the van, they could see snow covered mountains ranging in height from 10,000 to 12,000+ feet. I immediately remembered the first time I had this experience and a huge smile stretched across my face. There is nothing like the view from Red Mesa Ranch.

The first day is spent setting up home base and unwinding from the drive. We build campsites, hike the whole perimeter of the 200-acre ranch, make the menu for the week, grocery shop, and do other housekeeping chores. On the way back, we took a little adventurous detour and decided that we would drive up in the La Plata mountains. We got up to about 10,000 feet to a beautiful mountain stream and waterfall, where we filled up our cooler and took a little swim in the snow melt waters. We even had a snowball fight, in July!! We returned to camp for a quick dinner, stargazing (all of the kids say they have never seen this many), and earl bedtime.

Prepping for our upcoming backpacking trip meant daily training in backcountry cooking, first aid, orienteering, fire building, leadership roles, and gear management but our first week was full of exploring and adventure. We cliff jumped into green mountain rivers, took daily trips for snowball fights in the La Platas, and searched for elk (we didn’t see any). Spontaneous ventures to Ice Lakes, the southern San Juans, towns like Ouray, Silverton, and Telluride are what the kids loved most by the end of that first week.

DISCOVERY #3 – Spontaneous adventures are part of the prep process.

The second half of the Colorado Epic is a 25-mile hike in the wilderness, starting on the east side of the La Platas, with a saddle traverse between Centennial and Sawtooth peak, and ending in the La Plata basin. It was a route that we planned with the group, and each day, a different camper was our trail boss. The boss set the pace, made sure we’re on the right path, and chose our camp spot for night. Every step of the way we hit obstacles that would challenge us.

Day 2: Knee-deep snow during the steep basin trail and then a thunderstorm

Day 3: Decision to cut out a portion of the route

On Day 4, we decided that our group was so strong and responsible that we would leave them for a night of self-sufficiency in the wilderness. With instructions to meet us at 12 pm at the pick-up point, the counselors left them to cook dinner and breakfast, wake up and pack up camp on time (LNT style), and not be late to the checkpoint (there were donuts on the line!). The counselors packed up and hiked out (at least the campers thought we did!), leaving Goofy the dog behind to be in charge. We could tell they were nervous, but also excited — I mean what kids get to spend a night in the beautiful mountains alone, flying solo without adults telling them what to do?

We woke up nervous, wondering if the crew could accomplish their morning challenge. We hiked down to the predetermined meet up point, and — to our surprise — they all came hiking down the road, early! We ate lunch and debriefed the experience before driving out of the canyon and back to civilization & Red Mesa Ranch.

DISCOVERY #4: Togetherness in the wilderness brings out the best in a team!

To celebrate our success and newfound friendships, the group decided to sleep under the stars that night without tents. The next day, we started our drive back east.  On the way home we hit traffic in Denver, stopped at the City Museum in St. Louis, and reminisced about our two weeks together in the wild. Once we got back to Calleva we said our goodbyes and went our separate ways, but no one on that trip will forget the adventures we had and the memories we made.

Be A Part Of The Next Epic Adventure